The Master Poisoner - an audio dark story presented by the Online Stage, full of rich dialogue with creepy, sinister undertones and just happens to be one of our favourites.

To add to the macabre flavor of this production, co-author Maxwell Bodenheim was to become a murder victim himself in unusual circumstances that you can read about here.

Sobe, the master poisoner, and Maldor, his assistant, have spent their careers devising ever more elaborate and exquisite poisons. But Sobe's dreams of the ultimate poison that would give him mastery over death itself shock Maldor, who is even more troubled when he realizes that Sobe plans to experiment on his own wife, Fana. Fana, however, has her own ambitions, which may not coincide with her husband's agenda.

This baroque and grisly melodrama was devised by two of the most original dramatists of the early 20th century: Maxwell Bodenheim, known as "the King of Greenwich Village Bohemians" and Ben Hecht, who would go on to pen such classics as "The Front Page" and numerous Hollywood screenplays.

The Master Poisoner comes courtesy of The Online Stage – producers of numerous AudioBook and Theatre Productions, with a huge range that is free to enjoy! 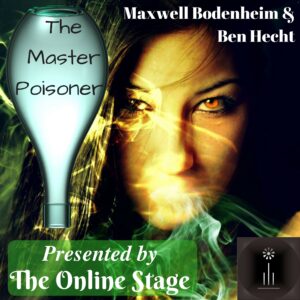 Ok, we grant you this is a couple of days late, but do please enjoy this 12-minute audio production. Just hit the play button and we are hoping it doesn’t spook you out too much.

This Halloween Dark Story – The Quantum Ghost of Cape Estelle written by Peter Tucker – is late but does come courtesy of our friends at The Online Stage – producers of numerous AudioBook and Theatre Productions. Roughly 50% of their content is absolutely free to enjoy!