It was a typical day, just like any other. Perhaps it was just a horrible coincidence that the following events were to occur on such an inauspicious day.

Most Friday the 13th's come and go, but in the more innocent times of 1973, on this specific Friday the 13th, a monster was born. A crime without any seeming motivation now recalled as one of the most shocking crimes that the nation had ever witnessed.

The man forever afterward would come to be known by several names; The Real Friday the 13th Killer and sometimes as The Monster of Worcester. Before that, he operated under the much more familiar moniker of David McGreavy.

In 1973 David was just 20 years of age, and things were not going too well. He had suffered a string of job losses, a broken-off engagement, and found that he was no longer welcome to live with his parents.

He needed assistance, and it was his friend Clive that came to his rescue. Clive invited McGreavy to live with his family, which included his heavily pregnant wife Elsie and their two other children, 3-year-old Paul and 1-year-old Dawn. 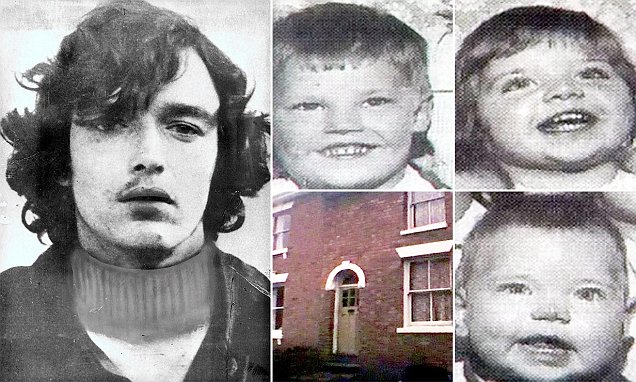 McGreavy paid the weekly rent and sometimes cooked Sunday roast dinners and loved the children, frequently playing with them, and generally acted like a father. On occasions, he was even interested and involved with discussions about child discipline. It seemed a happy arrangement that worked for everyone.

Elsie soon gave birth to her third child Samantha and shortly afterward returned to the workforce. Both couples were working and earning money, and the need for McGreavy to perform regular babysitting duties increased.

On this Friday the 13th in 1973, McGreavy had been drinking heavily that evening at the local pub and had quickly downed 5-7 pints of beer and had even gotten himself involved in a minor flare-up. Clive collected him from the pub and drove him back home to act as a babysitter while he went to pick up his wife from work.

Between the timeframe of 10:15 pm and 11:15 pm, McGreavy became disturbed and aggravated by the constant crying of one of the children, and something about the baby's non-stop crying caused McGreavy to snap. The man who loved children vanished, and in his place stood the Monster of Worcester.

Clive and Elsie returned home late that evening only to discover that police were already present on the scene, with no sign of McGreavy. The couple was taken to the local police station and informed of the fate of their children.

All three children met their end in three different ways. 9-month-old Samantha was the first victim and succumbed to a skull fracture, 4-year-old Paul strangled with wire, and two-year-old Dawn had her throat slit.

As if the murders alone had not been tragic enough, what was to follow was even more baffling. McGreavy would desecrate the bodies. Firstly he mutilated the bodies via the use of a pick-ax, and in the final act of madness, he impaled the children on the wrought iron fence of a neighbor's house.

It was an act which reverberated around the country, and the neighborhood with the innocuous-sounding name of Rainbow Hill, Worcester, would never be the same.

McGreavy left the house, and the police found him walking the streets in the early hours of the next morning. His initial denials did not last long, and he began answering questions confessing that "It was me, but it wasn't me. All I could hear was kids, kids, f… kids".

The Real Friday the 13th Killer would go on to be sentenced to multiple life terms, with a minimum imprisonment of 20 years, and had to spend most of his time behind bars in protective custody. The earliest he could be released was 1993.

Repeated parole requests had been turned down, but after 46 years in custody, McGreavy's release was finally approved and took effect in June 2019. According to reports, he is a much-changed man who now accepts responsibility for all he has done. Nevertheless, the terms of his release mean he will be subject to exclusion zones for the rest of his days, and his acts on Friday the 13th ensure that he will go down in history for all the wrong reasons.

Stay tuned for further On This Day in Crime series articles coming soon. In the meantime, on this Friday the 13th, the Dark Stories True Crime Walking Tours will naturally be running throughout Sydney, Newcastle, Brisbane, and Maitland.  Stay safe today and be sure to avoid black cats, don't walk under ladders and be careful not to break any mirrors!