The year was 1926, a year before Sydney's Razor Gang Wars were to become a slashing success, and the government was yet to introduce the Pistol Licences Act.

The razor had not yet replaced the gun as the weapon of choice for the residents of Darlinghurst, as a handsome, well-groomed young woman in her early 30s, with gold hair and blue eyes, was pottering about her apartment in the suburb soon to be known as Razorhurst.

She was living in the Harrow Mansions apartment block, but most knew little about her. Ruth liked it that way as it was useful to be unknown when one was maintaining a string of alias names.

It was an ordinary morning for the newlywed Ruth; a nondescript day of July 12th, 1926, as a telephone mechanic came to Harrow Mansions to do some work on the telephone in Ruth's flat. He entered the flat to find himself in an elegantly furnished lounge room. Sitting on a chintz-covered armchair was a well-dressed man of about 40, with dark curly hair. He was smoking a cigarette and reading a newspaper. As the mechanic left, Ruth was arranging some flowers in a vase on a window sill. She was softly singing, "Look for the Silver Lining." 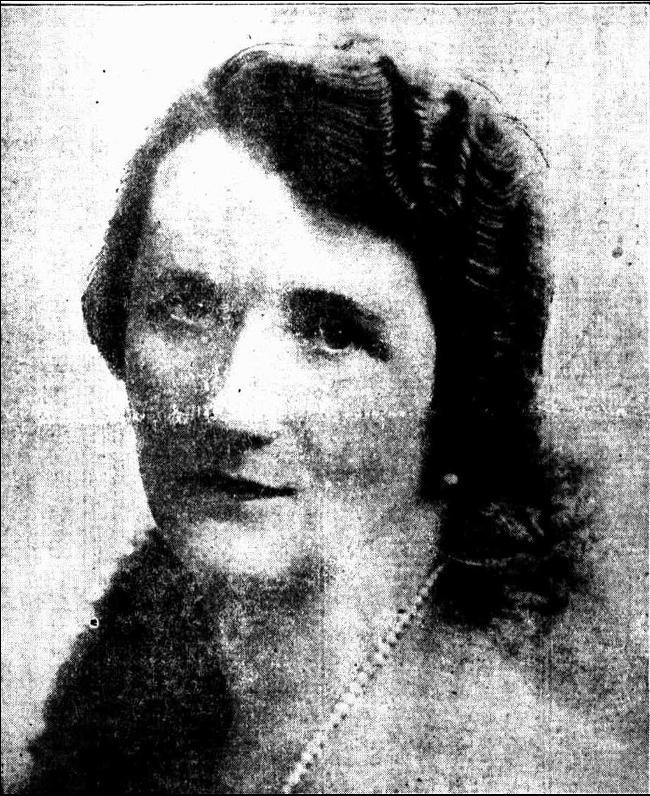 In the flat next door, a painter was hard at work and could hear a steady drone of voices from Ruth's apartment, and the sounds of gramophone music beginning to play. Suddenly, he was shaken to the core by the sounds of two quick pistol shots and a thud as if someone had fallen. Abandoning the production of his masterpiece, he ran out to the corridor and was just in time to see a man dashing down the three flights of stairs.

It seems Ruth had something of a problematic past. She had married for the first time, perhaps too young, eight years earlier in a marriage, that destiny determined would end in less than two months. The husband and wife separated. He moved to Queensland, and she came to Sydney, although it would be many years before they found the time to get officially divorced.

Happier times took a long time to reach Ruth, but in early 1926 she met the sea captain. He was no longer a dashing young man, but he had his charms, and he had his boat. They became friendly and spent a good deal of time together — Ruth as a guest aboard his vessel on a trip to Newcastle. Later on, when his ship was in Sydney, the Captain stayed with her in Harrow Mansions.

But Ruth was becoming increasingly uneasy in the relationship, informing her mother on one occasion that the Captain did not look like he would think twice about putting a bullet through her.  Even more alarmingly, Ruth would soon send a telegram to her mother complaining of a torrid trip to Melbourne in which she was forcibly married to the Captain. She now wanted to get away from him, and despite some inconvenience, she was able a few days later to get back to her Sydney home alone.

As for the Captain himself, he had become perturbed over his precarious financial situation. Ruth was a smart dresser and spent money freely, and this gave him the impression that she was a woman of wealth, and that she would be able to help him. His plan to force the marriage in secret, would enable him to resign command of his ship, and live a life of leisure as the husband of a wealthy woman. But Ruth was not well off and lived well above her means with the aid of a mysterious benefactor, and the Captain, not knowing any of this, followed her back to Sydney. It would be the morning of July 12th, 1926, as the gramophone started to play, that Ruth finally confessed the truth to him.

And it would only be a few minutes later when an agitated man, claiming to be a sea captain, would rush into the Darlinghurst police station, exclaiming, "I have shot a woman." He continued talking as he placed an automatic pistol on the counter, "Her name is Ruth, and I think she is dead."

The sea captain poured out his story to the police. He claimed that Ruth had become involved with another man that had caused them both some worry. Ruth was to speak to this man on the telephone and request money, as it seems he was the source of her apparent wealth. She asked her question and took a pause to comprehend the man's response, slowly turned to her husband, the sea captain, and said, "The old devil has got us beat. Poor old Snooks(using the Captain's pet name)", and began to cry.

The loss of her only source of finance was overwhelming as she continued, "You don't know what I've been through during the last two years. You have always told me you would do anything for me. Let us finish it all now."

The Captain drew an unlicensed pistol from his pocket, thinking the sight of it would bring her back to her senses. Instead, she clutched him by the head and pulled him towards her when, after a hysterical outburst from Ruth, the pistol went off twice.

When the police arrived at the apartment, the gramophone was still playing a soft, romantic tune. It seemed that Ruth's last act was to place a record on the gramophone turntable before the bullets struck home. The poignant name of the final song played on the record was titled, "The Last Waltz."

In a pool of sunlight on the flowered pile carpet, Ruth lay, fully dressed, her forehead stained with blood. Near her lay two empty automatic pistol shells. Ruth was unconscious and very weak, yet she was still breathing, so she was rushed to the hospital but sadly died in the ambulance. 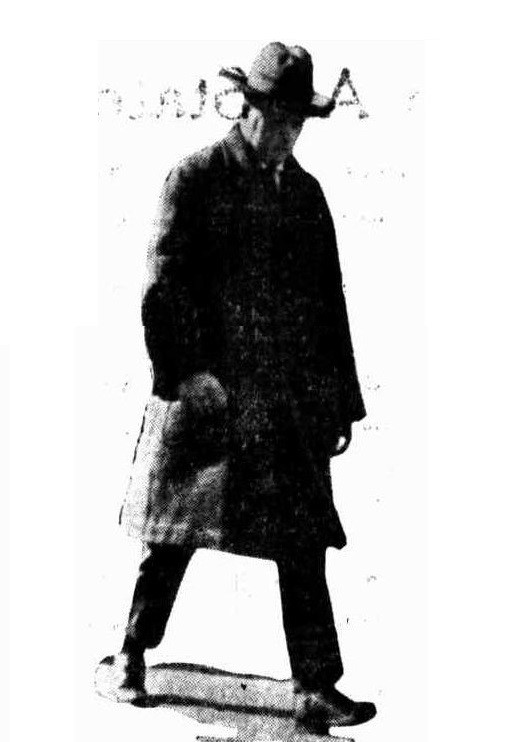 The Captain found himself charged with Ruth's murder, and an accurate account of the details came out in the trial. Having learned of Ruth's actual financial situation, the Captain, in a fit of rage, pulled Ruth close to him, drew out his revolver, and shot her twice in the head.

It did not take long for the jury to find him guilty of murder, but they added a recommendation for mercy due to the Captain's impassioned testimony. The judge did not agree, and in pronouncing the death sentence, he said, "Your crime was a callous one. What your motive was in taking the life of this woman, who seemed fond of you, I do not know." As was often the case in those times, the Captain did not walk the plank to his doom, but simply had his sentenced commuted to one of life imprisonment.

In the Goulburn Gaol, the sea captain would spend his days organizing first aid classes for his fellow inmates. He also became the head tinsmith, and in his cell, a large placard hung on the wall that read: 'God is Love' and became known by the prison population under the moniker 'The Skipper.'

At long last, he had become a kept man without any financial concerns, and perhaps, in the end, this was the silver lining he craved.

This story is an excellent example of the effectiveness of the Pistol Licencing Act 1927 which did so much to bring forth the Razor as a weapon in the Razor Gang wars that were just starting to heat up in the Sydney Steets.

On the evening of December 28th, 1931, when a man named Roberts approached a young woman, Renie, on William Street. He said that he wanted her to live with him as a “lady of the night”. The business of “white slavery” was thriving in the area at the time, with young women kidnapped and forced to work the streets for various local gangs. Roberts himself was known to police as a small time underworld figure, under the alias Paddy Reynolds, and for threatening people with a gun or a razor.

Renie just laughed at Roberts, so he drew a revolver, pointed it at her and said: "Either you live with me, or I will shoot you. I will see you here at 6 p.m.” He then jabbed Renie several times with the gun. Renie ran home and told the man she was living with, James White, what had happened. White was a decent man, who made his living “selling dolls and little toys to crowds of happy children at every showground” including each year at Sydney’s Royal Easter Show. When Renie told him what had happened, White said: "I will see the chap that threatened to shoot you."

The couple met Roberts on the corner of Kirketon Road and William Street just after 6pm. It was quite busy, with lots of people around. White confronted Roberts: "What is the idea of pulling a gun on this girl?” Roberts replied, "Mind your own business, or I'll blow your head off."

White didn’t back down… so Roberts stepped out onto William Street and started firing. Terrified men, women and children scurried away for their lives as White ducked behind a pole for cover. He pulled out his own revolver and shot twice at Roberts, who backed away across Williams Street, firing four shots in quick succession; one of these almost hit Renie, who ducked just in time, the shop window above her head smashing into pieces.

Roberts reached the other side of the street. Blood was streaming from his chest and he swayed where he stood. White’s gun had jammed, so a constable took him into custody. He calmly handed the gun over saying, "I have a licence."  Thank goodness for that! On the way to the police station White said: "Fancy these mongrels coming out and victimising women."

Meanwhile, another constable had gone to Roberts, who said: "He got me." Roberts pulled open his coat to reveal a large amount of blood.  He was taken to hospital where he died half an hour later.

Is this licenced or unlicenced?

At the trial Renie testified that she had been threatened by shady members of the underworld. On one occasion two of them had forced their way into her flat. “You little copper!” said one. “You don't think you're going to give evidence for White, do you?   If you do, you'll cop something for yourself.”  Despite this, Renie had bravely taken the stand, and White was found not guilty on grounds of self-defence… and in further good news, the timing of his release meant that he was just in time to sell his wares at the Royal Easter Show.

And as for Roberts? Nobody, not even his relatives, said they had any association with him and, after the post mortem was concluded, no one came forward to collect his body.

But most importantly of all, the Pistol Licences Act had done its job because - just for the record - no one in this case was shot by an unlicensed pistol.

If you want to learn more about the Razor Gang Wars then you might be interested in doing the tour sometime.  Or else book in for any of our other tours in Sydney, Newcastle, Maitland and Brisbane.